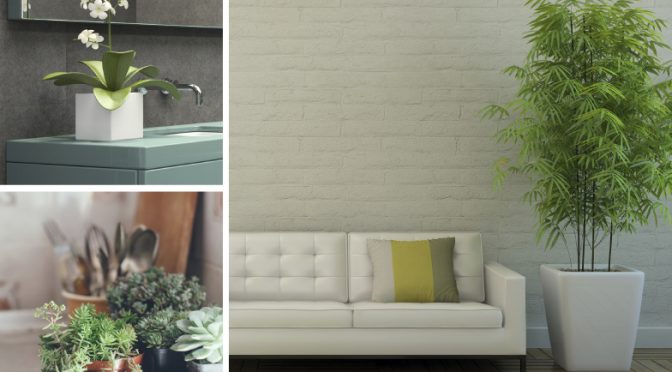 If you need to freshen up your living area and want something that never goes out of style, bringing the outside in is always a good idea—nothing brings more life to a space than the addition of a houseplant. Whether it’s herbs in the kitchen, a small tree in the living room, or succulents in the bathroom, plants are always a designer’s favorite. Try some of these tips to add some nature into your indoor space!

Find your ideal area.
Walk through your living space, and look at all of the areas where a plant could work. You want to place your plants in an area where it will be most visible. A beautiful plant in your home’s entryway, for instance, sets the mood from the moment you walk in.

Vary the sizes.
Mix up the plants that appear throughout your home for variety. Try incorporating different types and sizes for what is needed throughout your living area. For example, a tall tree can add height to a living room with a low couch, and a short plant on the kitchen table draws the eye to the center of the room.

Try a vertical garden.
You can still enjoy the benefits of having plants even if you have limited floor area. A vertical garden on a wall or a hanging plant in an unused corner of a room make great use of space.

Use a living centerpiece.
Most everyone would love to have fresh-cut flowers on their kitchen table year-round, but it can become expensive. With a planter, you can have real flowers on your table at all times, for a fraction of the cost. If you want to mix it up, have two or three planters that you rotate to different locations around the house.

Think of functionality.
Plants can be more than decorative. Bring your favorite herbs into the kitchen, and they can provide a tasty complement to your meals, as well as greenery to your kitchen window ledge. Because of its many health benefits, aloe is another great plant to have in any home.

Adding plants to your home’s decor will create a more vibrant, living space and can even add a breath of fresh air (literally) by improving the quality of your indoor air. So take an interior design tip from Mother Nature, and bring a touch of the outdoors inside your home!

Rent or Own?  What is the best decision?  I came across an article discussing homeownership and it’s relation to wealth creation.  Wanted to pass it along.   Food  for  thought!    Rob

Is homeownership getting out of fashion? Scary thought! Ridiculous actually! Why such a daring and provocative question then? Well, if you believe in stats, you have to be concerned that the rate of homeownership has been dipping of late.

The New York Times, in its SundayReview, wrote an editorial on the subject matter, partially using the findings of a research by the Joint Center for Housing Studies at Harvard University.  One sentence gives the full flavor of the article: “Since the housing bust, renting has been in and owning a home has been out.”

The declining ownership rate, mentioned above, proves the point. During the period of time when the rate shrunk to the extent of 8%, the number of homes occupied by tenants increased by about 25%.

Some observers may wonder whether this situation can be explained by the economic slowdown, with what it means in terms of jobs & incomes compression, or if it represents more of a trend, a lifestyle change of sort. Is homeownership losing its appeal?

The article is reassuring. Homeownership is as American as apple pie. It has been and still is, as much as ever, central to our ability to amass wealth. Between buying and renting, there is no competition. Even with the substantial decline in wealth due to the housing bust, says the NYT, the net worth of homeowners over time has significantly outpaced that of renters, a group which tends to accumulate little if any wealth.

When analyzing the reasons for the above, the Joint Center for Housing Studies makes the key point that homeownership requires buyers to save money for the down payment, and requires them to keep on saving to pay down the loan balance together with interest.

The alternative, renting a home, not only does not build equity, but does not require the tenants to save any money at all. They can if they are able & willing, but, at the end of the day, most don’t, because they don’t have to.

Of course we cannot downplay the risks involved in purchasing real estate. Prices can go up (as they have in a big way during the last three years or so), but they can also go down, shrinking equity or wiping it off altogether. Does not happen often and does not last long, but it sure hurts when it happens, as it did during the housing bust.

Frankly, I don’t know many people who wish they had rented a home rather than buy one. When in doubt, think about what you paid for the house you live in and what you could sell it for today. You can do the same exercise with all previous homes you bought and sold over the years. Great education to make believers out of the skeptics among us.

Bottom line: unless you are looking to stay in any given place a very short time (between two homes so to speak), there is no good reason to rent rather than buy, create wealth in so doing, and live the American dream.

Greetings everyone; those of you I know and those of you I’ve not yet met!   Welcome to my site where you will find information about my passion: Real Estate.   I will be sharing periodic details about market conditions here in the greater Silicon Valley, along with a sprinkling of tidbits about living in lovely Northern California.  I am a Bay Area native with extensive experience in all types of markets and I am excited to share my expertise and knowledge.  Thank you for checking out Rob Godar Blog, and please don’t hesitate to contact me if I may be of service to you, your family or friends.
Customer Testimonials

For all things Real Estate, Go to Godar!

Type in your email address to subscribe to Rob Godar Blog.